The first joint conference of the European Society for Central Asian Studies (ESCAS) and the Central Eurasian Studies Society (CESS) was, it is fair to say, a roaring success.

Held at the stunning new purpose-built campus of the American University of Central Asia in Bishkek, Kyrgyzstan, ESCAS-CESS was the largest international conference of Central Eurasian regional studies scholars ever to be held in the region.

I organized a panel and convened a roundtable, contributing to the eight sessions dedicated to education during the course of the conference. You can see the program here.

Together with presenters Dmitry Semyonov* and Daria Platonova of the Higher School of Economics (HSE) in Russia, Martha C. Merrill of Kent University in the US and Sari Eriksson of the University of Helsinki in Finland, we discussed our research on the forces that have driven changes in the size, the shape, and the governance arrangements of higher education systems in Central Asia and the wider post-Soviet space.

We collectively aimed to advance our understanding of how change happens in higher education and the implications these changes have had in particular post-Soviet settings.

The panel was adeptly chaired by Zumrad Kataeva of HSE in Russia and some excellent discussion points were raised by Bohdan Krawchenko, Director of the University of Central Asia.

My paper analysed how change in higher education since 1991 in Central Asian countries has been conceptualized, responding to a gap in the understanding of how theories of change are applied to higher education.

The paper was based on a document analysis of 34 purposively selected peer-reviewed English language academic journal articles published between 1991 and 2017. Articles were identified through the use of words such as ‘change’, ‘development’, ‘post-Soviet’, ‘reform’, ‘transformation’ and ‘transition’ in the title, abstract, keywords, or introduction.

Below is the visual I used to show how I mapped the articles on to the typology. During the presentation, I went through each of the quadrants in more detail to explain the rationale for placing the articles there and give some indication of the content / viewpoint that you might expect to find in each. 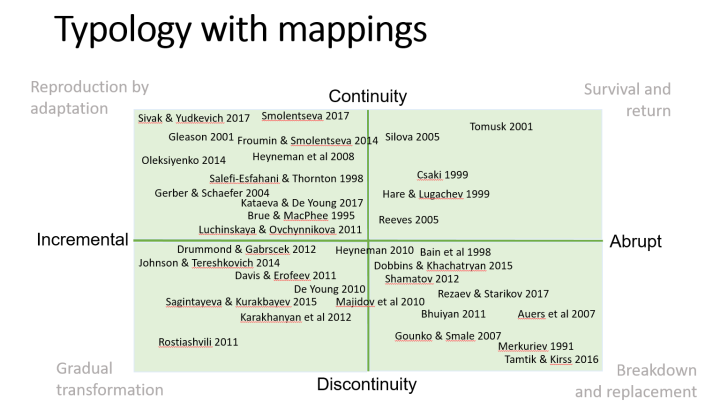 Roundtable: From Soviet to European to Global? Future Directions for Higher
Education in Central Eurasia

Over the last 25 years, the broad narrative of higher education reform in Central Eurasia has been a shift away from a Soviet model towards a model aligning with many European policies. More recently, efforts at adopting global norms are emerging.

Of course, such a concise synopsis overlooks the many intricacies of change in the very different Central Eurasian states. Furthermore, it might suggest that such a Soviet-European-Global ‘transition’ is not only linear, but that it (inevitably) leads from one starting point to one shared destination.

Thus, the aim of the roundtable was to question these assumptions from multiple perspectives. Some of the questions we focussed on were:

Is it meaningful to compare higher education across Central Eurasia?

Is there a crisis in the academic profession?

Who and what is higher education for?

Joining me at the roundtable were Martha C. Merrill of Kent University in the US, Sari Eriksson of the University of Helsinki in Finland and Zumrad Kataeva of the Higher School of Economics in Russia.

It was an excellent conference: interdisciplinary, a mix of newer and more established researchers, new contacts and old friends, and a chance to try out some of my PhD research through my panel presentation.

Were you at ESCAS-CESS? How did you find it?

*Shortly after publishing this blogpost, I received the tragic news that Dmitry died on 17 August 2017 following a car crash. Dmitry was a great young researcher with a promising future and his death is simply terrible news. My condolences go out to his family, friends and colleagues at the Higher School of Economics.

A summer of learning: Fieldwork, conferences, and more in Kazakhstan, Kyrgyzstan and Tajikistan « Emma Sabzalieva said:
August 19, 2017 at 04:25

Would it be possible for you to post a link where we could access drafts of the papers that were presented at the ESCS-CESS 2017 conference? Just wondering.
I would love to read some of the papers.
Sagol

Thanks for your comment, Joe. My work and Sari Eriksson’s are connected to our doctoral work so not being published as standalone papers. I believe that Martha Merrill is developing her paper for publication. The paper from Dmitry Semyonov (who tragically died on 17 August) and Daria Platonova is connected to a bigger project being published in book format this autumn. Details at https://www.palgrave.com/de/book/9783319529790

I believe NU is working on collecting the papers that they can and creating a link. Look forward to your other papers as they become available.

[…] empirical work on international students from South Asia who study at her university at the 2017 ESCAS-CESS Regional Conference. There are also a growing number of publications on the impact of the Kazakhstan government’s […]